OPN‘s investigative article in March 2016 about a Public/Private partnership formed between the Urban Redevelopment Authority (URA), University of Pittsburgh and CMU, involves seizing publicly owned land to build a private roadway shuttle system, using autonomous vehicles, through the Junction Hollow section of Schenley Park. At that time, city sources revealed that one reason for it was to establish a beachhead towards an eventual privatization of our Public Transit system. PennLive.com’s expos’e on Mayor Peduto’s behind-the-scenes relationship with Uber, including emails acquired through Right to Know Requests, seems to support our initial report. Evidence now shows a major reason for the URA proposed roadway is to nail down hesitant signers-on to the Almono-Hazelwood Green development by forcing it into another, much needed project. There is also much more to the story:

Formerly known as the Oakland Transit Connector, the plan has most recently been referred to as the Monongahela to Oakland link or Mobility Trail, as in the renewed project’s Request For Qualifications. Starting in the community of Panther Hollow, the route would commandeer the narrow city streets of each neighborhood at both ends, carving out a large section of the Junction Hollow portion of Schenley Park and ending up in Pittsburgh’s Four Mile Run neighborhood aka The Run, before continuing on to the planned Almono development in Hazelwood, recently rebranded as Hazelwood Green.

Residents of both historic communities in the crosshairs of the proposed route are adamantly opposed to the plan. The extremely invasive nature of the route and the every- 5- minutes 24-7 -frequency of shuttle traffic, would most likely erase both historic neighborhoods, and would certainly erase a major portion of publicly owned parkland, and by the city’s admission, part of which is deeded to city residents to remain public parkland, via Mary Schenleys will.

The URA, an extension of the Mayor’s office, entered into a Public Private partnership with UPitt and CMU in 2015 and announced the plan via the press. Uber and CMU have teamed up on driverless technology, and at the Hazelwood site Uber operates a test track for their autonomous vehicle program, including a vehicular roundabout. CMU most recently broke ground there for their expanding robotics program. A resident investigation discovered a 2009 CMU study, citing a need for more student housing to be built at the development, and the recently announced major UPMC expansion plan allows for easy dot-connecting.
Both universities wish to build publicly subsidized student housing at the site.

The Heinz Endowments and the Richard King Mellon and Benedum Foundations co-own the Hazelwood Green site, and it’s directors speak to and meet with Mayor Bill Peduto on a regular basis. As revealed in a Sept. 11, 2017 Post-Gazette report – “I rely on {the foundations} very much,” said Mr. Peduto, “we’ll be recognized in the future Pittsburgh for what we’ve done much in the same way that the {David} Lawrence administration is recognized in the Hill, East Liberty, and in the North Side, for the way urban renewal was done then.”

What some consider shocking about the Mayors statements, is the selective amnesia about the Lawrence administrations approach to, and results of development projects in those communities, as in the obliteration of 95 acres of homes and businesses displacing more than 8000 residents in the Lower Hill. In East Liberty, the URA demolished 1200 homes, reduced the size of the shopping district by 1 million square feet, resulting in the loss of hundreds of businesses and 4500 people. Recent East Liberty development has resulted in even more displacement of businesses and residents and the elimination of public space, and the Mayor’s office has been heavily criticized for it’s red carpet approach to development.

The Needs of The People

The Pittsburgh Parks Conservancy recently began facilitating a major storm/waste-water management project at the Four Mile Run Watershed- that includes parts of Squirrel Hill, Oakland, Hazelwood and Greenfield, and the restoration of Panther Hollow Lake. According to Phronesis, the contractor tasked with designing the plan, over 6 million gallons per year of storm and wastewater from those higher, border communities end up in The Run. During heavy storms, flash floods have overtaken the neighborhood’s streets, basements and cars, resulting in expensive out-of-pocket replacement costs for residents. Several feet high geysers blow up through manhole covers, flood waters have seeped up from basements to first floors, and the most recent flash flood necessitated a rescue by Pittsburgh firefighters of a resident and his young son clinging to the top of the family car, caught amongst the quickly rising waters. As development has increased exponentially over time on higher ground, as in Oakland, flooding in The Run has occurred more frequently.

At a much anticipated public meeting in The Run to showcase the preliminary drawings of the watershed plan to alleviate flooding in September 2017, the Parks Conservancy unveiled large architectural drawings including a gently rendered 20 foot wide “bike path” along Junction Hollow and a vehicular traffic roundabout near Panther Hollow Lake. A question posed about the curious width of the bike path were met with “Bikers along there like to go really fast,” and “it’s a public safety issue.” A question posed to an official about the vehicular roundabout were met with “This is all conceptual right now, these {drawings} will probably change.” Attendees at all meetings are encouraged to post their comments, likes and dislikes about the plan, and the published summary shows the general public’s strong preference for natural, ecological preservation of the Junction Hollow trail. 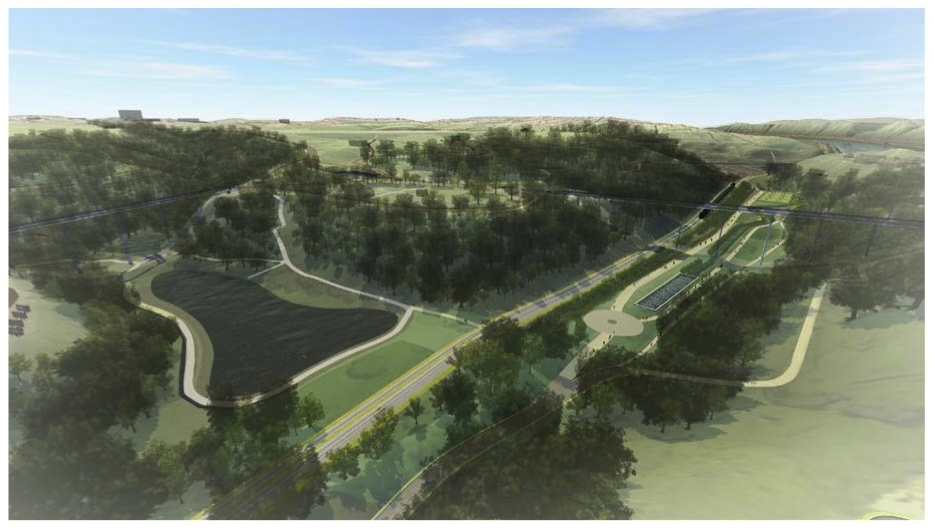 In mid-October, when asked about the somewhat covert illustration of the “bike path”, a source within the Parks Conservancy replied, “We’re not being covert”, “We had no choice, we had to {include the roadway}” – “No one will sign onto {the Hazelwood development} unless it’s built.” Additionally, since that initial Parks Conservancy meeting, the drawings of the watershed plan now includes a more physically defined version of the private roadway and roundabout, incorporated onto the flood control plan. 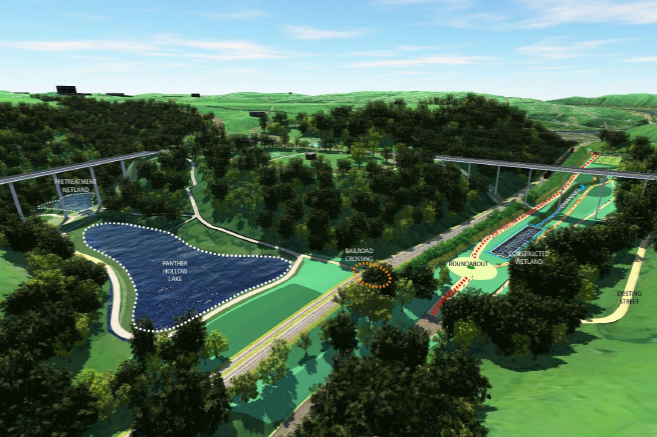 Furthermore, Run residents were told by officials that in order to secure the funding for the waste/storm water plan, a comprehensive neighborhood survey was needed- which was recently conducted in Summer/Fall of 2017. Residents asked that city officials not schedule public meetings on the roadway until results were revealed, but officials scheduled two meetings in neighboring Squirrel Hill on November 14 and 15, and did not properly notify residents, as many found out through a social media post a Squirrel Hill resident made less than a week beforehand. Additionally, the Squirrel Hill Urban Coalition hosted an Open House by invitation on November 16th at the same location to showcase the Watershed drawings. Results of the neighborhood survey were finally released on November 28 that some residents say was a contentious meeting with public officials.

This raises many questions, especially; what un-named official(s) directed the Parks Conservancy to force an unnecessary private roadway plan on top of a much needed major storm/waste-water management project, part of which is decreed by the federal EPA in order to separate storm and waste water within Pittsburgh’s sewer system? Why did city officials schedule public meetings in bordering communities before survey results were released and after being asked not to? Why has the proposed roadway become more physically defined in the architectural drawings of the water management plan over time?

At the public meeting on November 15th, Department of Mobility and Infrastructure Director Karina Ricks cited “lack of mobility” in Hazelwood as a need for the roadway, and offered a few mobilty-related statistics as proof, while seeming to imply that poverty is rooted in a lack of mobility. A few attendees commented that City officials seemed to be pitting one neighborhood against another by subtle implication- namely, that if residents of The Run/Panther Hollow do not get behind the roadway plan, they would be to blame for the failure to revitalize Hazelwood. Public officials statements to the press throughout the last two plus years align with this tactic by asserting that residents opposition would be standing in the way of “progress.” But the chronic neglect caused by successive city administrations over decades is the reason Hazelwood’s needs have not been met.

Furthermore, some Hazelwood residents have confirmed that the city has for a few years claimed that the Almono/HG development is essential to the revitalization of their neighborhood, and by extension the roadway is essential to the success of the development site. City officials never revealed the plan to Four Mile Run and Panther Hollow residents until announcing it through a Post-Gazette article published August 31, 2015, although it has been mentioned matter-of-factly to those outside the two at-risk communities.

Another reason cited by officials is commute times from Hazelwood to Oakland, claiming 30-40 minutes, but is based solely on rush hour traffic times. Residents tested their claim by driving already existing routes at varying times with a stopwatch. The 2nd Ave-Bates street corridor, from Hazelwood to the main campuses in Oakland took 12-14 minutes. Varying existing routes from the intersection of Saline, Greenfield and Irvine streets took 3-4 minutes to Forbes Ave. in Oakland.

The Deja Vu All Over Again

As in the 1950’s and 60’s, recent Pittsburgh development projects have resulted in long-term resident-cleansing in communities such as East Liberty (again) and Lawrenceville. While taking a chainsaw approach to revitalization, the subsequent artificially created real estate bubble has led to extreme gentrification. Residents end up forced out of their neighborhoods through various means. New “market rate” housing balloons up the average rents and purchase costs of homes, and will most likely lead to exorbitant property tax increases. Promises made by city officials to not make the same mistakes as in the past end up lost in the feeding frenzy that has followed the behind-closed-door meetings with politicians and private partners. And building even more expensive market rate housing in the city while 21,000 units short of affordable housing seems exceptionally brazen.

The Smoke and Mirrors

City officials are now trying to reboot their efforts while claiming a “robust public process” by holding public meetings in bordering neighborhoods, and maintain that no final decisions have been made, but:

City officials are merely feigning transparency by holding public meetings in surrounding neighborhoods, using what many believe to be misleading statistics and cherry-picked facts, while trying to manufacture consent outside of the at-risk neighborhoods and create an “aura of inevitability” to bulldoze over the wishes and needs of residents.

A large majority of residents in both at-risk neighborhoods remain adamantly opposed to the project. After a State of PA grant proposal for the project was pulled, the city submitted a proposal for the Smart Cities Grant competition in 2016, shifting priority to the proposed Oakland to Hazelwood link from their original focus- another controversial project- the $200 million BRT-Oakland-to-Downtown rapid bus project. A 457 signature petition opposing the roadway was electronically delivered via Change.org, to Mayor Bill Peduto including signatures by 7 members of the Greenfield Community Association’s Transportation/Development Committee. A letter writing campaign asking that Pittsburgh not be awarded the grant was organized and sent to the Secretary of the Department of Transportation, that included OPN’s initial investigative report and the petition link. It is unknown whether this was a factor in Pittsburgh’s failure to secure the federal grant.
A recent, comprehensive neighborhood survey shows a large majority of residents adamantly oppose the roadway, and that their needs lie in stopping the frequent flooding.

City officials assert a need for better mobility between Hazelwood and Oakland, while Pittsburghers for Public Transit say there has been no demand from Hazelwood residents for more transit options. As the recently completed neighborhood survey proves, Run residents aren’t in need of better mobility, and are vehemently opposed to any transit stop that would guarantee an invasion of park-and-ride-commuters into their community. Residents say there is nothing in the city’s proposed private roadway plan for them, that it would forever alter, and probably erase their communities in order for private interests to benefit financially through publicly subsidized development.