I just wanted to ignore Donald Trump’s campaign. Like so many other people, I thought it would fizzle out at some point. But gradually his rhetoric–and the violent consequences of it–became too glaring for me to ignore.

On February 29, 2016, I saw the video of Time magazine photographer, Christopher Morris, choke-slammed by a Secret Service agent for stepping outside of the media pen in Radford, Virginia. The next day, video emerged of a young black woman being shoved repeatedly by Trump supporters at a rally in Louisville, Kentucky.

I couldn’t ignore it any longer. If fascism was rising in the United States, I wanted to see it firsthand and document it in photographs. I decided that I would approach Donald Trump’s rallies strictly from the perspective of a photojournalist. I was not going there to protest, and I made up my mind that I would not intervene in any situation unless someone was being physically harmed. 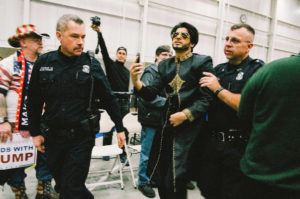 Since I made that decision, I’ve attended three Trump rallies: first in Warren, Michigan, then in Cleveland, and finally in Youngstown, Ohio. What I’ve learned in these rallies is something about the very real danger our country faces. I could point out the obvious: that the Republican Party is on the verge of nominating a strongman, who proposes no real substantive solutions or policies, who incites violence, who seeks to suppress the freedom the press, who disrespects women, and who preys upon the xenophobia of Americans. But what I think is more important is to consider the conditions that brought our country to this point and to understand that his supporters are not necessarily persons to be vilified. 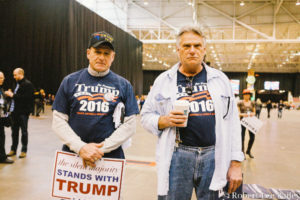 Trump’s supporters are working class Americans who have witnessed their government turn its back on them. They have reasons to be angry. Chris Hedges writes about this issue in his essay, “The Revenge of the Lower Classes and the Rise of American Fascism.” It’s not hard to understand why they embrace a charismatic celebrity with no political experience, who promises to have all the answers, manipulatively articulates their frustrations, and points the finger at others who they can blame for their predicament.

This is also why I came to have mixed feelings about the protesters who have been the center of so much attention at these rallies. On the one hand, I have great admiration for individuals who will put themselves in volatile situations and speak out against racism and Islamophobia. On the other hand, whenever a protester would voice their dissent, they seemed to play right into Trump’s hand. These spectacles energized the crowds, and gave Trump someone else to point to and blame for their problems. Furthermore, every time he shouted, “Get them out of here! Out! Out! Out!,” Trump was able to portray himself once again as the strongman who will not kowtow to the politically correct liberals and minorities–everyone they have been taught to fear and hate by decades of Republican rhetoric. 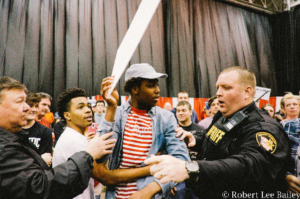 The rallies in Warren and Cleveland were frequently interrupted by protesters, and the crowds gleefully anticipated these moments of excitement. But there was not a single protester that I saw or heard in Youngstown. In part this may have been due to the logistics of the event: it was at a small airport and there was no parking available at the actual location of the rally. Instead, attendees parked at a baseball field several miles away and were shuttled to the rally. Any protester who had arrived by bus likely be forced to return on a shuttle with Trump’s supporters, walk back to their cars, or find other means of transportation. In any case, the result was quite frankly a boring rally.

Trump’s speech, without its obligatory interruptions from protesters, seemed to drag on. Without the spectacle of the protesters, Trump’s rally was about as boring as you would expect a political rally to be. This leads me to question the method of protesting at Trump’s rallies, as George Lakey does in his article, “How Empathy, Not Protest, Can Defeat Trump and Right-Wing Extremism.” It seems to me now that the protests only drive more people to Trump’s side. It only broadens the divide between an increasingly polarized nation and confirms the assumption of the “Silent Majority,” as Trump supporters describe themselves, an assumption that the politically correct, college-educated elitists are the enemies that seek to silence them.

Robert Lee Bailey is a Pittsburgh-based street photographer and photojournalist. His work has recently been featured in Local Pittsburgh and Feature Shoot. You can see more of his work at www.robertleebailey.com .